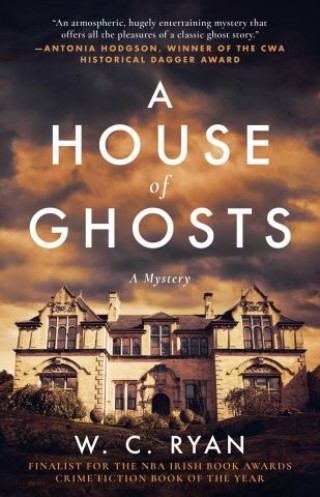 A House of Ghosts

A Gripping Murder Mystery Set in a Haunted House

Finalist for the Irish Book Award for Crime Fiction Book of the Year, a Classic Cozy Big-House Mystery Haunted by the Specters of World War One—For Readers of Agatha Christie and Simone St. James

Winter 1917. As the First World War enters its most brutal phase, back home in England, everyone is seeking answers to the darkness that has seeped into their lives. At Blackwater Abbey, on an island off the Devon coast, armaments manufacturer Lord Highmount has arranged a spiritualist gathering to contact his two sons, both of whom died at the front.

Among the guests, two have been secretly dispatched from the intelligence service: Kate Cartwright, a friend of the family who lost her beloved brother at the Somme and who, in the realm of the spiritual, has her own special gift; and the mysterious Captain Donovan, recently returned from Europe. Top secret plans for weapons developed by Lord Highmount’s company have turned up in Berlin, and there is reason to believe enemy spies will be in attendance. As the guests arrive, it becomes clear that each has something they would rather keep hidden. Then, when a storm descends, they find themselves trapped on the island. Soon one of their number will die. For Blackwater Abbey is haunted in more ways than one . . . .

An unrelenting, gripping mystery, packed with twists and turns and a kindling of romance, A House of Ghosts is the perfect cold-weather read.