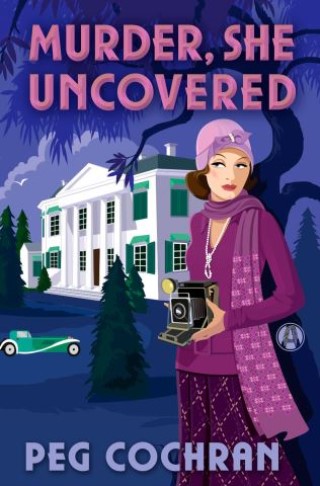 An intrepid 1930s Manhattan socialite uncovers deadly secrets during an assignment to the Hamptons in this riveting historical cozy mystery for readers of Victoria Thompson, Susan Elia MacNeal, and Rhys Bowen.

Westhampton, 1938. To the dismay of her well-to-do family, Elizabeth “Biz” Adams is quickly establishing herself as a seasoned photographer over at the Daily Trumpet. Growing more confident in her decision to pursue a career, Elizabeth is thrilled when she and her reporter sidekick, Ralph Kaminsky, are sent to Long Island to cover the story of a young maid found dead in one of the glamourous summer homes in the devastating aftermath of the Great New England Hurricane—also known as the Long Island Express.

At first it’s assumed that the young woman was caught in the terrible storm, but when a suspicious wound is found on the side of her head, the police suspect murder. The maid’s death becomes even more tragic when it’s discovered she was pregnant, and with Elizabeth and Kaminsky at the scene of the crime, the Daily Trumpet scoops all the other papers in town.

The young woman’s boyfriend emerges as the likeliest suspect. But as Elizabeth follows the story, she begins to wonder whether someone in the household of the maid’s employers might be responsible—someone who’ll stop at nothing to keep the truth about the baby’s paternity hidden. . . .

Look for all of Peg Cochran’s delightful mysteries featuring Elizabeth Adams, which can be read together or separately:
MURDER, SHE REPORTED
MURDER, SHE UNCOVERED