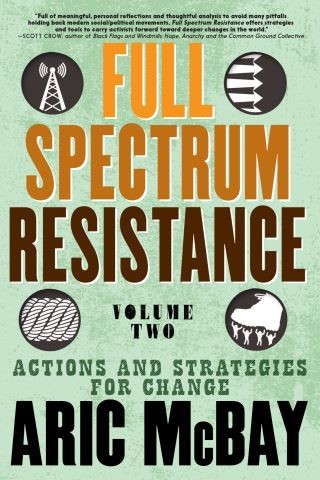 Actions and Strategies for Change

A guide to direct action for those disillusioned with the posturing of liberal “activism.”

The radical left is losing, but it doesn’t have to be that way. Here is the radical’s guide to activist work—the manual we need at this crucial moment to organize for universal human rights, a habitable earth, and a more egalitarian society.

Thoroughly exploring the achievements and failures of radical movements throughout history—from 19th-century anti-colonial rebellions in China and the environmental actions of First Nations and Native American tribes throughout the 20th century, to Black Lives Matter and the fight for Gay Liberation—the two volumes of Full Spectrum Resistance candidly advocate for direct action, not just risk-averse models of protest marches and call-ins. With in-depth histories and case studies of social justice and environmental movements, noted writer, activist, and farmer Aric McBay explains why passive resistance alone cannot work, and how we must be prepared to do whatever it takes to create substantial social change.

In Volume 2: Actions and Strategies for Change, McBay uses the successful strategies of various actions, such as the Greek Resisters of the 2008 Greek Television Takeover, to articulate the best practices for inter-activist coordination and communication with mass media to effectively spread message. Covering reconnaissance methods and other forms of intelligence-gathering, Volume 2 guides the reader in smart decision-making and damage control, such as how to recover from both covert and overt adversarial attacks, such as COINTELPRO (1971). Moreover, this manual clearly articulates the best strategies and practices for the financial, logistical, and tactical organization necessary to all successful radical movements in the long term.

Aric McBay: Aric McBay is an organizer, a farmer, and author of four books. He writes and speaks about effective social movements, and has organized campaigns around prison justice, Indigenous solidarity, pipelines, unionization, and other causes. You can find his work at www.aricmcbay.org.