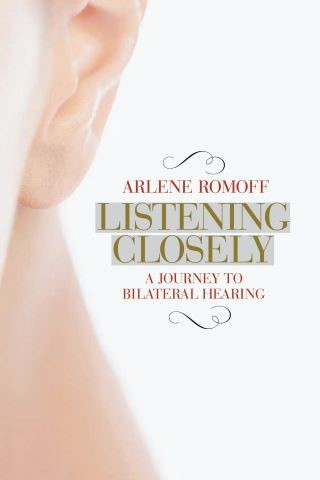 A Journey to Bilateral Hearing

Imagine what it would be like not to hear a sound--no music, no friendly voices, no children's laughter. Arlene Romoff doesn't have to imagine how it would feel: she lived it. Although she was born with normal hearing, in her late teens it began to slip away, as if someone were lowering the volume of the world around her. Over the next twenty-five years, Arlene began a long, slow descent into deafness so profound that no hearing aid or assistive device could help. The experience was devastating.

Arlene's journey, however, isn't just about the magic of technology. What she endured reveals as much about the strength of the human spirit, about the wonders of chance and fate, and about making the most of what life dishes out. For Arlene, events seemed to unfold almost as if they were a part of some elaborate plan: just when she went deaf, her insurance company began paying for the implants. And ten years later, when her old cochlear implant finally failed she received new state-of-the-art technology and underwent yet another metamorphosis--one that helped her continue to counsel others in a similar situation.

LISTENING CLOSELY will give you a chance to walk in Arlene Romoff's shoes, to understand the pain of her loss and the joy of once again being able to hear the music of the world. Those suffering from hearing loss--or who have loved one who is--will find Arlene's very special journey both inspirational and informative.

Arlene Romoff: Arlene Romoff co-founded Advocates for Better Communication, the advocacy committee of the Center for Hearing and Communication (CHC), and the Hearing Loss Association of New Jersey. She also serves as a governor-appointed member of the NJ Division of the Deaf and Hard of Hearing Advisory Council, and sits on other advisory boards in the state. In 2010, she received HLAA’s State Organization Award.

She is the author of the book HEAR AGAIN--BACK TO LIFE WITH A COCHLEAR IMPLANT, as well as numerous articles for magazines and newsletters. Her pioneering efforts helped bring open captioned live theatrical performances to Broadway, London, and regional U.S. theaters, for which she received the Humanitarian Award from Theater Resources Unlimited. Considered an expert on hearing loss, Arlene is consulted and speaks on a wide range of topics including cochlear implants, assistive technology, accessibility, advocacy, and sensitivity training.

Arlene has two grown children and resides in New Jersey with her husband, Ira.