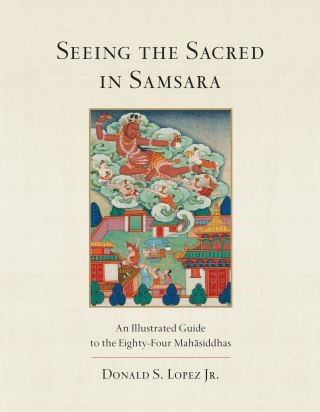 Seeing the Sacred in Samsara

An Illustrated Guide to the Eighty-Four Mahasiddhas

Rare paintings set aside life stories of each of the eighty-four wild Buddhist saints of ancient India.

This exquisite full-color presentation of the lives of the eighty-four mahāsiddhas, or “great accomplished ones,” offers a fresh glimpse into the world of the famous tantric yogis of medieval India. The stories of these tantric saints have captured the imagination of Buddhists across Asia for nearly a millennium. Unlike monks and nuns who renounce the world, these saints sought the sacred in the midst of samsara. Some were simple peasants who meditated while doing manual labor. Others were kings and queens who traded the comfort and riches of the palace for the danger and transgression of the charnel ground. Still others were sinners—pimps, drunkards, gamblers, and hunters—who transformed their sins into sanctity.

This book includes striking depictions of each of the mahāsiddhas by a master Tibetan painter, whose work has been preserved in pristine condition. Published here for the first time in its entirety, this collection includes details of the painting elements along with the life stories of the tantric saints, making this one of the most comprehensive works available on the eighty-four mahāsiddhas.

Donald S. Lopez, Jr.: DONALD S. LOPEZ JR. is the Arthur E. Link Distinguished University Professor of Buddhist and Tibetan Studies and Chair of the Department of Asian Languages and Cultures at the University of Michigan. He specializes in late Indian Mahayana Buddhism and Tibetan Buddhism and is the author of numerous books, including A Study of Svatantrika, The Madman's Middle Way, and Prisoners of Shangri-La.