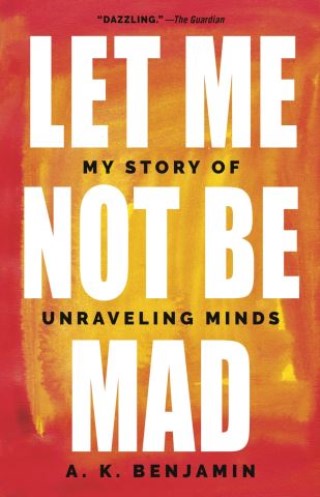 Let Me Not Be Mad

My Story of Unraveling Minds

Inspired by Dr. A. K. Benjamin's years working as a clinical neuropsychologist at a London hospital, this multilayered narrative interweaves Benjamin's own sometimes shocking personal experiences with those of his mentally disordered patients.

What do doctors actually think about when you list your problems in the consulting room? Are they really listening to you? Is the connection all in your head? Every day for ten years--even while his hospital became the set for a reality television series--clinical neuropsychologist A. K. Benjamin confronted these questions, and this book is his attempt to tell the truth about what happens in these rooms in hospitals the world over.

What begins as a series of exquisitely observed case studies examining personalities on the brink of collapse soon morphs into a unique work of nonfiction as Benjamin's own psyche begins to twist the story in surprising ways. Blazingly original, Let Me Not Be Mad undermines the authority we so willingly hand over to clinical psychologists as it bears witness to the self-obsession of Western society, and ultimately offers a glimpse of what it might mean to be sane and truly empathetic.

Fractured, sad, playful, brilliant, and confrontational, this is a confession by a professional that delves into the heart of the patient-doctor relationship and ultimately finds love. This twisting psychological journey will be read and reread.

A. K. Benjamin: Dr. A. K. Benjamin trained in clinical neuropsychology in his thirties and worked for ten years in diagnostics and acute rehabilitation in a large London hospital. Previously, he worked as a screenwriter for several years before setting up an NGO for homeless drug and heroin addicts who had been excluded by all other services, and was also a contemplative monk in California for two years. Having taken a sabbatical to look at the possible role of meditation and other Eastern practices in neuro-rehabilitation, he now lives in India and works at an NGO in rural Uttar Pradesh, setting up cognitive rehabilitation services for children with acquired and congenital neurological conditions.