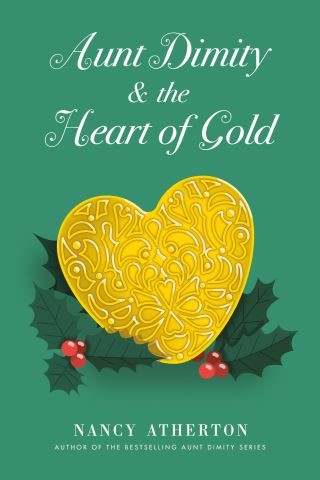 Aunt Dimity and the Heart of Gold

In the newest installment of the bestselling Aunt Dimity series, a dreary Christmas leads to hidden treasure and new friendships

It's almost Christmas in the small English village of Finch--and everyone is sick. Though many of the villagers regretfully decline their invitations to Emma Harris's annual Christmas bash, Lori Shepherd has no intention of missing it. When the winter weather takes a turn for the worse, it's agreed that none of the guests will leave until morning. There's general merriment as the Christmas party becomes a pajama party--until a car appears in the winding driveway and promptly slides off the slick pavement and into a ditch.

Matilda "Tilly" Trout--a lost and scatterbrained, middle-aged woman--is mercifully unhurt and invited to stay the night. While she catches her breath, Emma asks her other guests if they would like a tour of the Manor--including an odd room that puzzles her. Several guests put forth guesses as to its purpose, but it's Tilly who correctly identifies the room as a chapel. Placing a palm on one of the ornately-carved panels, Tilly finds a hidden compartment concealing a pile of glittering treasure--including an exquisitely decorated heart made of solid gold. Where did it come from, and why does it look so different from everything else in the chapel? Why didn't Emma even know about this hidden compartment in her own home until now--and how did Tilly?

With Aunt Dimity's otherworldly help and Tilly's bewildering store of knowledge, Lori and friends set out to unravel the mystery behind the heart of gold. And, against all odds--and Christmas finally comes to Finch!

Nancy Atherton: Nancy Atherton is the bestselling author of twenty-four Aunt Dimity Mysteries. The first book in the series, Aunt Dimity's Death, was voted "One of the Century's 100 Favorite Mysteries" by the Independent Mystery Booksellers Association. She lives in Colorado Springs, Colorado.