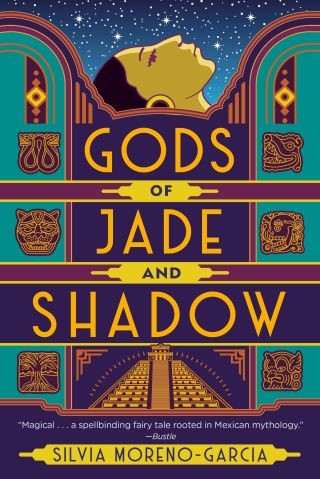 Gods of Jade and Shadow

The Mayan god of death sends a young woman on a harrowing, life-changing journey in this dark, one-of-a-kind fairy tale inspired by Mexican folklore.

“A spellbinding fairy tale rooted in Mexican mythology . . . Gods of Jade and Shadow is a magical fairy tale about identity, freedom, and love, and it's like nothing you've read before.”—Bustle

The Jazz Age is in full swing, but Casiopea Tun is too busy cleaning the floors of her wealthy grandfather’s house to listen to any fast tunes. Nevertheless, she dreams of a life far from her dusty small town in southern Mexico. A life she can call her own.

Yet this new life seems as distant as the stars, until the day she finds a curious wooden box in her grandfather’s room. She opens it—and accidentally frees the spirit of the Mayan god of death, who requests her help in recovering his throne from his treacherous brother. Failure will mean Casiopea’s demise, but success could make her dreams come true.

In the company of the strangely alluring god and armed with her wits, Casiopea begins an adventure that will take her on a cross-country odyssey from the jungles of Yucatán to the bright lights of Mexico City—and deep into the darkness of the Mayan underworld.

Praise for Gods of Jade and Shadow

“A dark, dazzling fairy tale . . . a whirlwind tour of a 1920s Mexico vivid with jazz, the memories of revolution, and gods, demons, and magic.”—NPR

“A magical novel of duality, tradition, and change . . . Moreno-Garcia’s seamless blend of mythology and history provides a ripe setting for Casiopea’s stellar journey of self-discovery, which culminates in a dramatic denouement. Readers will gladly immerse themselves in Moreno-Garcia’s rich and complex tale of desperate hopes and complicated relationships.”—Publishers Weekly (starred review)

Silvia Moreno-Garcia: Silvia Moreno-Garcia is the author of Signal to Noise, named one of the best books of the year by BookRiot, Tordotcom, BuzzFeed, io9, and other publications; Certain Dark Things, one of NPR’s best books of the year, a Publishers Weekly top ten, and a VOYA “Perfect Ten”; the fantasy of manners The Beautiful Ones; and the science fiction novella Prime Meridian. She has also edited several anthologies, including the World Fantasy Award winning She Walks in Shadows (aka Cthulhu’s Daughters). She lives in Vancouver, British Columbia.