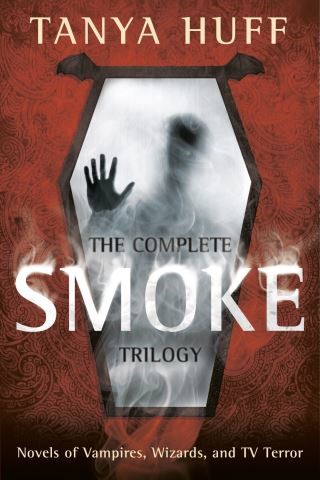 When Tony Foster relocated to Vancouver with his vampire Henry Fitzroy, he knew it was his chance to get his act together. In an example of art echoing life, Tony landed a job as production assistant for the syndicated TV show, Darkest Night, a series about a vampire detective. And except for his unrequited crush on the show's handsome co-star, Lee Nicholas, Tony was pretty content.

Until everything started to fall apart on the set.

It began with shadows­­--shadows where they didn't belong, that almost had an existence of their own. Tony tried to ignore it--until he found Nikki Waugh's body, and felt the shadow's touch, and a stunt crash went wrong for no discernible reason--and Tony knew that he had to find out what was threatening everyone on the set.

Tanya Huff: Tanya Huff may have left Nova Scotia at three, and has lived most of her life since in Ontario, but she still considers herself a Maritimer. On the way to the idyllic rural existence she shares with her partner, Fiona Patton, six cats, and a Chihuahua, she acquired a degree in radio and television arts from Ryerson Polytechnic University—an education she was happy to finally use while writing her recent Smoke novels. Of her previous twenty-three books, the five featuring Henry Fitzroy, bastard son of Henry VIII, romance writer, and vampire—Blood Price, Blood Trail, Blood Lines, Blood Pact, Blood Debt—are among the most popular.