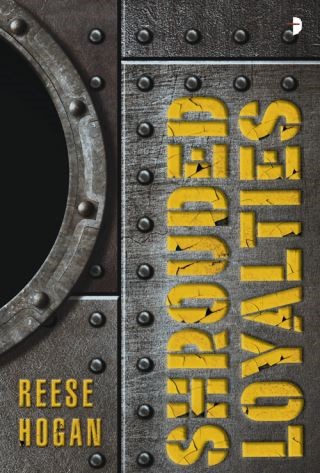 A soldier returns home with a dangerous secret from an alternate realm, unaware that she is surrounded by spies and collaborators, in this intense military science fiction novel.

Naval officer Mila Blackwood is determined to keep her country’s most powerful secret – shrouding, the ability to traverse their planet in seconds through an alternate realm – out of enemy hands. But spies are everywhere: her submarine has been infiltrated by a Dhavnak agent, and her teenage brother has been seduced by an enemy soldier. When Blackwood’s submarine is attacked by a monster, she and fellow sailor, Holland, are marked with special abilities, whose manifestations could end the war – but in whose favor? Forced to submit to military scientists in her paranoid and war-torn home, Blackwood soon learns that the only people she can trust might also be the enemy.

Reese Hogan: REESE HOGAN loves nothing more than creating broken relationships in broken worlds. With a Bachelor’s degree in English and a minor in journalism, Hogan has spent the last twenty years honing her craft by taking classes, listening to podcasts, and attending writing workshops and critique groups. She is passionate about music, especially alternative and punk rock, and adamantly believes that art can reach out in a way no other form of communication can. She lives with her family in New Mexico.