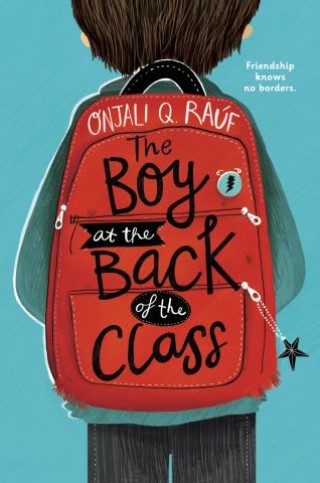 The Boy at the Back of the Class

Told with humor and heart, The Boy at the Back of the Class offers a child's perspective on the refugee crisis, highlighting the importance of friendship and kindness in a world that doesn't always make sense.

There used to be an empty chair at the back of Mrs. Khan's classroom, but on the third Tuesday of the school year a new kid fills it: nine-year-old Ahmet, a Syrian refugee.

The whole class is curious about this new boy--he doesn't seem to smile, and he doesn't talk much. But after learning that Ahmet fled a Very Real War and was separated from his family along the way, a determined group of his classmates bands together to concoct the Greatest Idea in the World--a magnificent plan to reunite Ahmet with his loved ones.

This accessible, kid-friendly story about the refugee crisis highlights the community-changing potential of standing as an ally and reminds readers that everyone deserves a place to call home.

"This moving and timely debut novel tells an enlightening, empowering, and ultimately hopeful story about how compassion and a willingness to speak out can change the world." --School Library Journal, Starred Review

Onjali Q. Raúf: Onjali Q. Raúf is the founder and CEO of Making HerStory, a UK nonprofit that works to fight human trafficking and gender-based abuses and crimes. She lives in the UK, and you can find her on Twitter at @OnjaliRauf. The Boy at the Back of the Class is her debut novel.