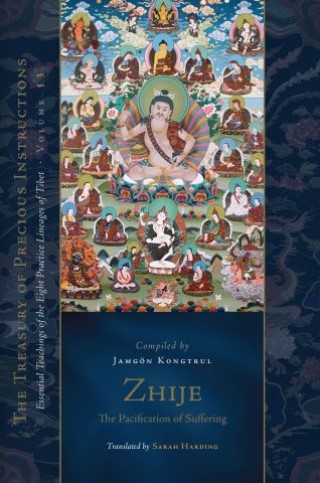 Zhije: The Pacification of Suffering

Essential Teachings of the Eight Practice Lineages of Tibet, Volume 13

Jamgön Kongtrul Lodrö Taye presents the Zhije (Pacification) teachings of some of Tibet's most historically significant and influential teachers in this next volume of the Treasury of Precious Instructions series, Kongtrul's great collection of teachings from all of Tibet's Buddhist lineages.

The Treasury of Precious Instructions by Jamgön Kongtrul Lodrö Taye, one of Tibet's greatest Buddhist masters, is a shining jewel of Tibetan literature, presenting essential teachings from the entire spectrum of practice lineages that existed in Tibet. In its eighteen volumes, Kongtrul brings together some of the most important texts on key topics of Buddhist thought and practice as well as authoring significant new sections of his own.

In this volume, Kongtrul presents a diverse corpus of texts from the Zhije (Pacification) tradition that trace especially to the South Indian master Dampa Sangye (d. 1117), whose teachings are also celebrated in the Chöd (Severance) tradition. It includes source scriptures by Dampa Sangye, empowerments by Lochen Dharmashrī, and guidance by Dampa Sangye, Lochen Dharmashrī, and Sönam Pal. Also included are lineage charts related to the transmission of Zhije teachings as well as detailed notes and an orientation to the texts by translator Sarah Harding.

Jamgon Kongtru Lodro Taye: JAMGÖN KONGTRUL LODRÖ TAYE (1813-1900), a pivotal figure in eastern Tibet's nonsectarian movement, was one of the most outstanding writers and teachers of his time.

SARAH HARDING has been a Tibetan Buddhist translator and practitioner since 1974. She became a student of the late master Kalu Rinpoche, and in 1980 she completed a traditional three-year retreat under his guidance. She is a fellow of the Tsadra Foundation and was on the faculty of Naropa University for nearly twenty years.