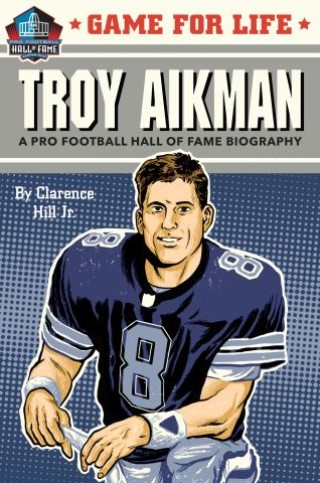 Join the Pro Football Hall of Fame in celebrating this legendary quarterback and football commentator! It's a new biography based on interviews with Troy Aikman himself!

Troy Aikman has always been a winner. In high school, he won the state championship—in typing! Of course, he was a football star in high school, too. And in college. And he was a number-one draft pick. As a quarterback for the Dallas Cowboys, Troy won three Super Bowls—and was once the Super Bowl MVP. Then, he became a football analyst for Fox Sports, where millions of fans watch and listen to his Super Bowl commentary. He's even been nominated for four Emmys for sportscasting! What will Troy Aikman win next?

Game for Life biographies support the Pro Football Hall of Fame's mission to honor the heroes of the game, preserve its history, promote its values, and celebrate excellence everywhere. Don't miss the other books in the series, John Madden and Michael Strahan!

Clarence Hill, Jr.: THE PRO FOOTBALL HALL OF FAME, located in Canton, Ohio, the birthplace of the National Football League, is visited by hundreds of thousands of football fans annually. The Hall has enshrined 310 members since its founding in 1963.

CLARENCE HILL, JR. has spent the past 20 years as the Dallas Cowboys beat reporter for the Fort Worth Star-Telegram. A Texas native who now resides in Arlington, he grew up a fan of the team he now covers. Clarence covered the final 4 years of Aikman's playing career.