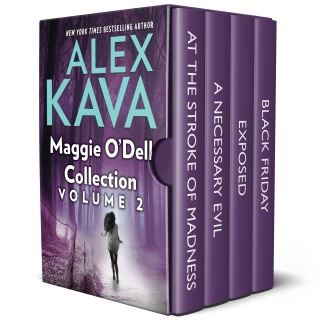 AT THE STROKE OF MADNESS

With only an old man afflicted with Alzheimer’s as a material witness, FBI Special Agent Maggie O’Dell is fast on the trail of a diabolical serial killer who targets people with physical disabilities, removing each victim’s imperfections to keep as a twisted trophy.

When a monsignor is found knifed to death in an airport restroom, FBI special agent Maggie O’Dell is called in to profile the ritualistic murder, the latest in a series of killings. Maggie soon discovers a disturbing Internet game that’s popular among victims of abuse by Catholic priests, and wonders if the group has turned cyberspace justice into reality.

Maggie knows dangerous minds, but she must tackle a new opponent from within a biosafety isolation ward—someone targeted Quantico with a deadly virus, and Maggie might have been contaminated. She just fears her last case might end with the most intelligent killer she’s ever faced escalating from murder…to epidemic.

On the busiest shopping day of the year, a group of idealistic college students believe they’re about to carry out an elaborate media stunt at the largest mall in America. What they don’t realize is that instead of electronic jamming devices, their backpacks contain explosives, and they’re about to become unwitting suicide bombers. Agent O’Dell has to work quickly to figure out who is behind the terrorist plot.