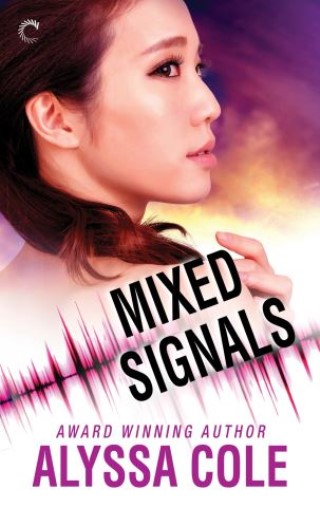 “This trilogy gets better with each book.” —Library Journal

“Cole’s Off the Grid series succeeds because it captures the unsettling details of its dystopian setting beautifully, but also because its main characters are so very human and relatable.”

“This is friends-to-lovers romance…but it’s in the science-fiction story line where Cole really shines. The setup of Mixed Signals seems eerily plausible, and the entwined love story will satisfy sci-fi and romance readers alike.”

Four years after the Flare, the world is finally starting to rebuild

For Maggie Seong, that means leaving the safety of her family’s cabin for college. She won’t be alone, though—hunky former military cadet Edwin Hernandez, family friend and self-appointed Protector of Maggie’s Virtue, will be there. Maggie would much prefer that Edwin himself dispose of her “innocence,” but he’s already rejected her advances once, and a girl has her pride.

Things look pretty bleak romance-wise until Maggie discovers that Devon, the pre-Flare internet boyfriend she’d assumed was dead, is not only alive but on campus. Despite the passage of time, their bond is strong, and they quickly pick up where they left off. Even as Devon aims for a chance at love IRL—everything Maggie thought she’d wanted—Edwin’s desire to protect her makes her question her heart.

Maggie’s torn between the future she didn’t dare to hope for and the past she can’t let go of. And when a group of neo-Luddite terrorists threaten the campus, everyone’s loyalties will be tested. To ensure that the world doesn’t go back to the dark days following the Flare, Maggie might have to sacrifice it all.

This book is approximately 62,000 words

Alyssa Cole: Alyssa Cole is an award-winning author of historical, contemporary, and SFF romance. Her books have received critical acclaim from The New York Times, Library Journal, BuzzFeed, Kirkus, Booklist, Jezebel, Vulture, Book Riot, and Entertainment Weekly. She can usually be found watching anime with her husband or wrangling their menagerie of animals.