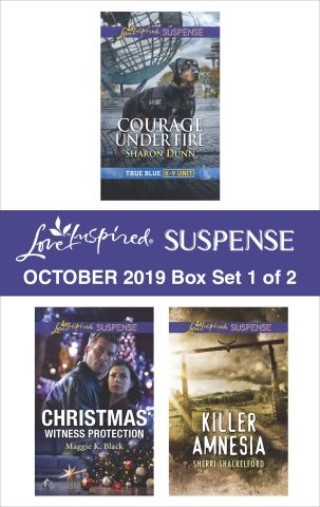 Rookie K-9 officer Lani Branson’s one goal in her training exercise is to prove herself capable of the job—until she’s attacked. Now a ruthless stalker’s threatening her at every turn, and her boss, Chief Noah Jameson, and his K-9 partner have made it their mission to keep her alive.

When Corporal Holly Asher’s witness protection transportation is targeted, going on the run with Detective Noah Wilder is the only way to survive. But can they pose as an engaged couple at Christmas without tipping off those who want to kill her?

Emma Lyons’s investigative reporting skills are put to the test when she loses her memory after an attempt on her life. But researching her own past with the help of Deputy Liam McCourt leads to town secrets darker than they imagined…and a killer who won’t stop until they’re silenced.

Sharon Dunn: Sharon Dunn grew up in the country where there was ample opportunity for her imagination to flourish. She started writing when she was pregnant with her oldest son. Three kids and a lot of diaper changes later, she has published both award winning humorous mysteries and romantic suspense. Her hobbies include reading in small increments, trying to find things around the house, being the mom taxi, and making pets out of the dust bunnies under her furniture.Maggie K. Black is an award-winning journalist and self-defense instructor. She's lived in the United States, Europe and Middle East, and left a piece of her heart in each. She now makes her home in Canada where she writes stories that make her heart race.
A former naval reservist with a top-secret security clearance, Sherri Shackelford writes rapid-fire suspense featuring captivating characters and heart-pounding romance. She's authored more than a dozen novels, including both contemporary suspense and historical romance. Visit her at sherrishackelford.com or sherri@sherrishackelford.com.