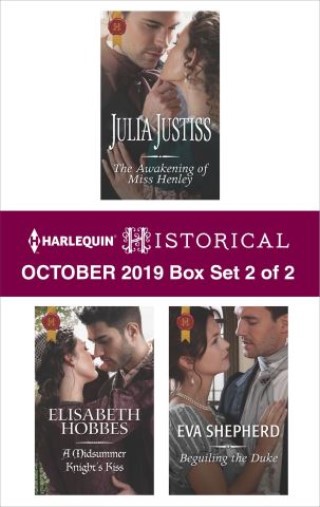 THE AWAKENING OF MISS HENLEY

Destined never to marry, Miss Henley is tempted by rakish Lord Theo. Perhaps he could even show her the pleasures of the marriage bed…

To save her friend from marriage, Rosie Smith poses as the heiress to try and dissuade the duke! Falling for him herself would be disastrous…

Julia Justiss: Long before embarking on romantic adventures of her own, Julia Justiss read about them, transporting herself to such favourite venues as ancient Egypt, World War II submarine patrols, the Old South and, of course, Regency England. Soon she was keeping notebooks for jotting down story ideas. When not writing or traveling, she enjoys watching movies, reading and puttering about in the garden trying to kill off more weeds than flowers.Elisabeth’s writing career began when she finished third in Harlequin’s So You Think You Can Write contest in 2013 and hasn't looked back. She teaches Primary school but would rather write full time because unlike five year olds her characters generally do what she tells them. She spends most of her spare time reading and is a pro at cooking one-handed while holding a book.

She lives in Cheshire because the car broke down there in 1999 and she never left.After graduating with degrees in history and political science, Eva Shepherd worked in journalism and as an advertising copywriter. She began writing historical romances because it combines her love of a happy ending with her passion for history. She lives in Christchurch, New Zealand, but spends her days immersed in the world of late Victorian England.