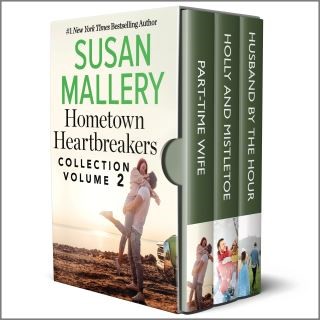 Rugged police officer Craig Haynes comes from a long line of heartbreakers. But he’s hoping to change that…especially when it comes to Jill Bradford, his sons’ new nanny. Two parts sweetness, one part-sin, the pint-sized redhead proves to be a miracle-worker with his three rambunctious boys. Except Jill Bradford isn’t looking to open her wary heart to anyone. Will the Haynes family turn out to be what’s she been looking for all along?

When firefighter Jordan Haynes rescues Holly Garrett’s mischievous cat, Mistletoe, from her burning apartment, he winds up in the hospital. Holly, a shy, innocent 28-year-old, feels so bad about Jordan’s injuries that she stops by his hospital bed and begins visiting him at home, as well. Soon she’s not only preparing his evening meals but also giving him sponge baths, and she definitely isn’t prepared for the sexy glances Jordan throws her way or the feelings that he awakens in her.

Jordan knows that Holly is awkward and inexperienced, but there’s something so bewitching about her, and he just can’t let her be alone for Christmas. No, he can play the needy patient for as long as it takes to convince Holly to keep him company through the holidays—if not longer.

Husband by the Hour

Hannah Pace needed a pretend husband—fast! She lied to her long-lost mother about being married, and now she had to produce the groom. So she hired hometown bad boy Nick Archer. Though he wasn’t every mother’s dream, he sure was Hannah’s hottest fantasy….

Trouble was, Nick relished the part a bit too much. Dizzying kisses, heated glances, tender touches. Minute by minute, Nick’s paid performance was feeling all too real. And soon Hannah wanted him to be a husband for life…

Susan Mallery: #1 NYT bestselling author Susan Mallery writes heartwarming, humorous novels about the relationships that define our lives—family, friendship, romance. She's known for putting nuanced characters in emotional situations that surprise readers to laughter. Beloved by millions, her books have been translated into 28 languages.Susan lives in Washington with her husband, two cats, and a small poodle with delusions of grandeur. Visit her at SusanMallery.com.