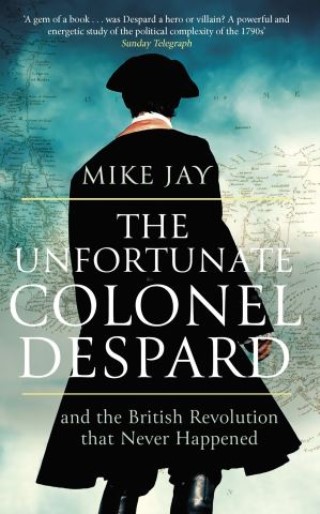 And the British Revolution that Never Happened

This is the true story of Colonel Edward Marcus Despard, the character in the fifth series of the BBC's popular television drama Poldark.

Colonel Despard was the last person to be sentenced to hanging, drawing and quartering in Britain - for high treason, an alleged plot to kill the king. His execution on 21st February 1803 was witnessed by twenty thousand hushed onlookers. Their silence was ominous, for few believed he was guilty. His death would tear apart a Britain still reeling from the impact of the French Revolution and the Napoleonic Wars.

But who was Edward Marcus Despard? Was he, as his comrade-in-arms on the Spanish Main Lord Nelson believed, an outstanding British army officer of unimpeachable honour, courage and patriotism? Or, as the white slave-owners of the Caribbean claimed, a traitor not only to his nation but to his race, who had married a local woman and championed the rights of freed slaves?

And when Despard returned to London to answer these allegations, did he commit himself to the cause of political reform in Britain's best interest? Or did he join a shadowy international terrorist conspiracy dedicated to the murder of George III and the overthrow of the state? Despard's contested fate marked the sensational climax to a British revolution that never happened, but it also presaged the birth of modern democracy.

'Compelling, absorbing and wide-ranging . . . Jay weaves a complex variety of themes, many with overtly topical resonances, into Despard's journey from hero to traitor'
Sunday Times