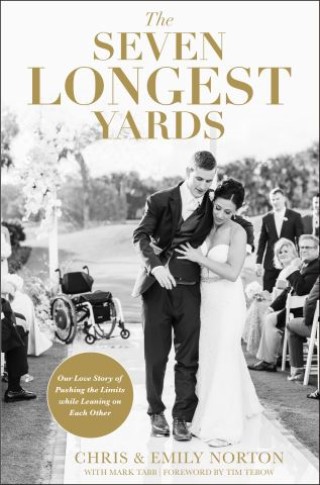 He was told he'd never walk again. She was losing hope that she'd ever feel whole again. This is their miraculous true story of defying the impossible.

"In my very first impression of Chris, I was blown away by his determination to stay positive, do the work, and trust that God had a bigger story in mind . . . this book is a master class in the power of perseverance." -Tim Tebow

Quadriplegics simply do not walk again - yet millions watched as Chris Norton defied incredible odds and took step by impossible step across his graduation stage. With his fiancée Emily by his side, those unbelievable steps became the start of an extraordinary journey for them both. Told from both of their unique perspectives, this moving story invites you to find, as Chris and Emily have, that God can transform our lowest points into life's greatest gifts.

In a moment, Chris went from a talented college football player with a promising future to a quadriplegic with a 3 percent chance of ever moving or feeling anything below his neck, much less walking again. Determined to prove the doctors wrong, he pushed himself through grueling, daily workouts to achieve his goal four years later: walking the stage to receive his college diploma with Emily's help, and to the world's astonished applause.

Meanwhile, Emily faced her own challenges as she sunk into a deep battle against anxiety and depression, despite her life's outward blessings. Day by day, decision by decision, Chris and Emily committed themselves to taking the extra step, trusting God, and leaning on the help of others. In a story of courageous faith and grit, this extraordinary couple's journey ultimately led them to tackle the seven longest yards - down the wedding aisle and into a new life together.

And what a new life it is: Chris and Emily have adopted five beautiful girls and welcomed foster children - seventeen and counting! - into their home and hearts. Let this book be your inspiration for defying your own impossible, and finding joy on the other side.

Chris Norton is an in-demand motivational speaker with a message of hope, resilience, and faith. He has spoken everywhere from small classrooms to stadiums with audiences ranging from schools and colleges to non-profits and corporations. Past clients include John Deere, the NCAA, Culvers, and the University of Iowa football team. Chris was named to ITA Group's list of "The Hottest Event Keynote Speakers for 2018" that includes Michael Strahan, Mark Cuban, Daymond John, Barbara Corcoran, and Magic Johnson. Currently residing in Florida, Chris wouldn't take back the play that left him paralyzed due to the positive influence his story has had on millions of people worldwide. His Chris Norton Foundation has raised close to one million dollars to help others with spinal cord injuries and other neurological disorders.

Emily Norton's lifelong passion is to make a difference. Growing up in the small town of Muscatine, Iowa, Emily encountered many kids who came from unfortunate circumstances causing her to be heartbroken. Not one to sit by idly, Emily sought out ways to love and care for everyone who was hurting, whether it was being a mentor, starting an after-school program for middle school girls called Girl Talk, visiting group homes, or creating a talk show to share inspiring stories. Emily received her degree in family services from the University of Northern Iowa to pursue her dream of helping kids in foster care. Over the last year she and Chris have fostered 11 children with five currently in their home. Emily believes life is for helping others and making an impact.

Mark Tabb has authored or coauthored more than thirty books, including the number one New York Times bestseller, Mistaken Identity.