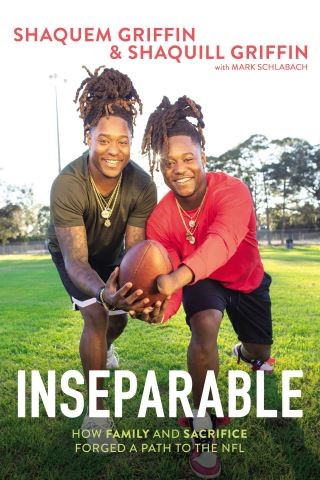 How Family and Sacrifice Forged a Path to the NFL

Much more than a sports memoir, in Inseparable Shaquem and Shaquill Griffin share the previously untold details of the powerful and inspiring story behind the modern NFL’s first one-handed player, and his twin brother’s unrelenting devotion, sacrifice, and love. It’s the story of Shaquem’s understanding of God’s purpose for his life—to inspire others to stop being afraid and to stop making excuses—and his family’s unwavering support in spite of seemingly insurmountable obstacles. The Griffins’ unlikely underdog story has already captured the imagination of millions of football fans and physically challenged people around the world.

Identical twins Shaquem and Shaquill Griffin were born on July 20th, 1995 to parents Terry and Tangie Griffin in St. Petersburg, Florida. Shaquem was born with a prenatal condition that led to him having his hand amputated at the age of 4. Since that time, with his brother always at his side, he has been proving to people that one hand doesn’t make him less of an athlete or person. Growing up, both boys excelled in football and track, and the twins went on to play together at The University of Central Florida. In 2017, Shaquill was drafted to the Seattle Seahawks as a third round pick, where he was joined by Shaquem in the fifth round of the draft in 2018. Shaquem is the first modern one-handed player in the NFL and was awarded the NFL Game Changer Award in early 2019.

Mark Schlabach is the coauthor of the New York Times bestselling books, Happy, Happy, Happy, Si-cology 1, and The Duck Commander Family. He is one of the most respected and popular college football columnists in the country. He and his wife live in Madison, Georgia, with their three children.