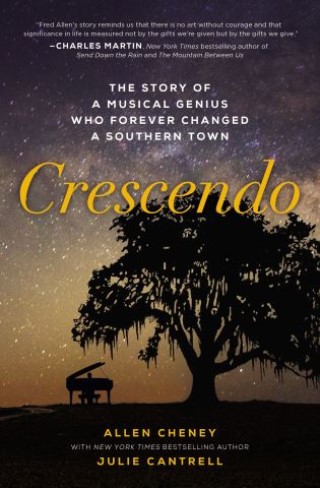 A hidden story of human triumph, Crescendo takes you on the rare journey of a musical prodigy who changed an entire community forever.

More than eighty years ago, a musical prodigy with a brilliant mind was born into a poor, uneducated, and abusive family in rural South Georgia. At three years of age, Fred Allen could play Mozart sonatas on the piano without missing a note. But in spite of his obvious talent, Fred’s parents discouraged him from expressing his creativity and intelligence, even going so far as locking him away from the old piano in their home. Forced to fend for himself through his adolescent years, Fred knew that if he was ever to make something of himself, he would need to find a way to rise above his broken background. With incredible effort, and a few miracles along the way, Fred managed to do just that, eventually earning acceptance into The Julliard School in New York City. While simultaneously attending Juilliard, Union Theological Seminary, and Columbia University, he also began directing a local church choir, where he caught the attention of the music industry.

During the musical revolution of the 1960s, Fred earned numerous Grammy nominations and built a growing reputation within the industry. But just as his new career was beginning to take off, Fred was faced with an impossible decision. His wife announced that she no longer wanted to raise their daughter in New York City and was heading home to the South. Fred had come so far from the pain and brokenness of his past, he couldn’t imagine giving up everything just to return to his childhood home.

Trying not to think about what could have been, Fred took a job as a high school music teacher in his hometown of Thomasville, Georgia, a community of only 30,000 people. Far from the executive suites of RCA and the allure of Broadway, Fred never could have imagined that his new role would not only transform his life but also change an entire community forever.

Allen Cheney is a partner and cofounder at Mountview Creative, where he oversees day-to-day operations and project development. His team at Mountview produces a wide range of content, from music videos and commercials to documentaries and feature films. In 2015, Allen coproduced the feature film Some Freaks, winner of numerous domestic and international film festivals, and became executive producer of the international feature film Heartbeats in 2016. Allen’s work has been highlighted by Forbes, which also announced his development of the Fred Allen Project.

Julie Cantrell is a New York Times and USA Today bestselling author, editor, and TEDx speaker. Her work has received numerous awards and special recognition across both faith-based and general audiences.