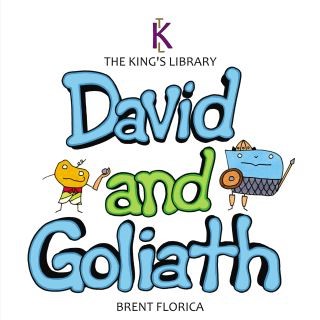 The King’s Library: David and Goliath is a Bible classic brought to life by a colorful cast of quirky Stoof characters, originally conceived by three-year-old Autumn Florica on her DoodlePro. When the Philistine giant Goliath challenges God’s people, all of Israel’s army runs in fear of his might. The battle appears lost, until a shepherd boy named David stands up to Goliath with a sling and a stone to prove that with God, even the smallest person can overcome evil through faith.

From his youth, Brent Florica has been dreaming, doodling and designing. His fervent desire since becoming a Christian has been to bless others and glorify God through creativity and art. Born and raised in Ontario, Canada, Brent felt the Lord’s call to move to Saskatchewan in 2014, where he currently lives with his loving wife and three stupendous children. The artwork of his three-year-old daughter, Autumn, formed the foundation of all the Stoof characters featured in The King’s Library.