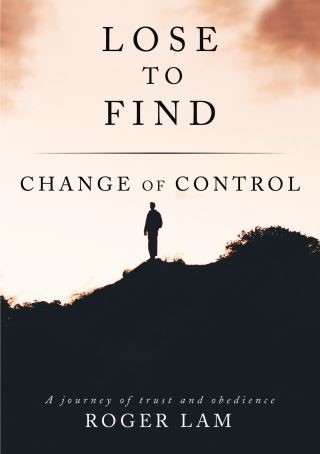 Roger Lam thought he was done with writing after pouring 46 years’ worth of his life lessons into his first book, Lost and Found: Money vs. Riches. That was almost certainly the case until multimedia messages from God led him to liquidate his entire equity portfolio in early February 2018, followed by an unbelievably supernatural confirmation the following morning. Immediately, deep in Roger Lam’s heart he knew this was a story that had to be told for the glory of God, but little did he know that this dramatic conclusion to his pledge for church premises pales in comparison to what God had planned ahead for him in the rest of 2018.

Lose to Find: Change of Control reads like a Christ follower’s diary of wrestling with surrender. Despite constantly feeling like the most unlikely spokesperson and champion for stewardship and generosity, it became clear to Roger Lam that God was not satisfied to leave the other areas of his life besides money remaining in his control--his vocation, safety and purpose. Continuing in the same authenticity and conversational tone for which readers around the world have shown appreciation in his first book, Roger Lam humorously shares his continued God-ordained spiritual transformation, going beyond the area of money which (he thought) he had already mastered. This new leg of his Spirit-filled journey entails unimaginable, interlinked supernatural adventures starting in Hong Kong, followed by divine appointments in Beijing, Tel Aviv, Jerusalem, South India, Shanghai and Washington D.C. all within a calendar year.

Roger Lam is the author of Lost and Found: Money vs. Riches and a speaker. After having spent twenty-five years in the finance industry, his God-given vision is to unveil the deceitfulness of wealth to Christ followers globally as a cure to the root problem of many social ills. He lives in Hong Kong with his wife Sylvia and their children Danielle and Enoch.