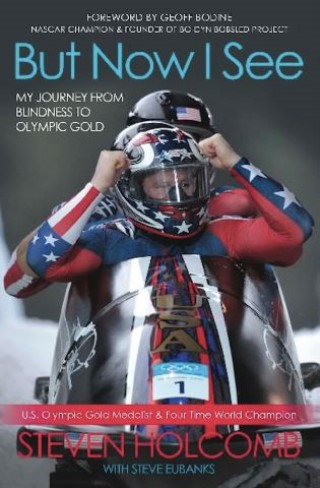 But Now I See

My Journey from Blindness to Olympic Gold

The US Olympic gold medalist and four-time World Champion bobsledder shares the traumatic account of losing his sight—and his remarkable comeback.

One of the top bobsledders in the world and leader of the four-man American team, Steven Holcomb was considered a strong gold contender for the 2010 Vancouver Olympic Winter Games. Talented, aggressive, and fearless, he was at the top of his game. But Steven Holcomb had a dangerous secret.

He was going blind.

Holcomb was diagnosed with keratoconus—a degenerative disease affecting 1 in 1,000 and leaving 1 in 4 totally blind without a cornea transplant. In the world of competitive sports, it was a dream killer. But Holcomb kept his secret from his coach, sled mates, and the public for months and continued to drive the legendary sled The Night Train.

When he finally told his coach, Holcomb was led to a revolutionary treatment, later named the Holcomb C3-R. With his sight restored to 20/20, Holcomb became the first American in 50 years to win the International Bobsled and Skeleton Federation World Championship, and the first American bobsledder since 1948 to win the Olympic gold medal.

With a foreword by Geoff Bodine, NASCAR champion and founder of the Bo-Dyn Bobsled Project, But Now I See is the intimate portrait of a man’s pursuit of a dream, laced with humility and the faith to find a way when all seems hopeless. It’s about knowing anything is possible and the gift of a second chance.

“Steven is a class act, and his story is one of perseverance.” —Scott Blackmun, CEO, US Olympic Committee