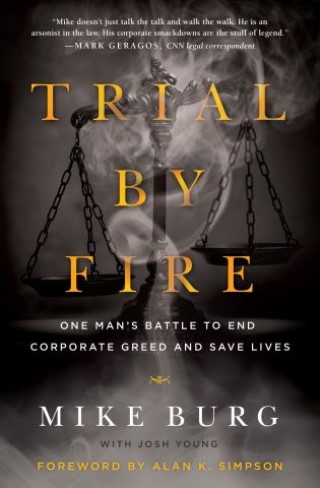 One Man's Battle to End Corporate Greed and Save Lives

Bullied as a Jewish kid in the hardscrabble neighborhoods of Chicago, Mike Burg learned to fight at an early age. As an attorney, he brought that same fire—and innate sympathy for the underdog—into the courtroom to become one of America’s top trial lawyers fighting for consumers’ rights.

Burg has represented everyone from the cast of The Little Rascals to Ralph Tamm in the first NFL steroids case, and in Trial by Fire, Burg recounts some of his most thrilling and significant cases. Taking on a negligent gas company, he won financial settlements for victims as well as changes to a city’s pipelines that saved thousands of lives. He led hundreds of individuals against companies shilling drugs such as Fen-Phen, Yaz, Zyprexa, and Pradaxa. And he fought an eight-year battle against UBS for knowingly selling risky mortgages to investors.

Burg also describes some of his most fascinating stories from outside the courtroom, including the time he performed stand-up comedy alongside Roseanne Barr, went golfing with Michael Jordan, and attended President George W. Bush’s inauguration as H. W.’s guest. His incredible journey—complete with theatrics, excitement, humor, and maybe just a hint of craziness—will make you laugh, leave you in disbelief, and, most of all, inspire you.