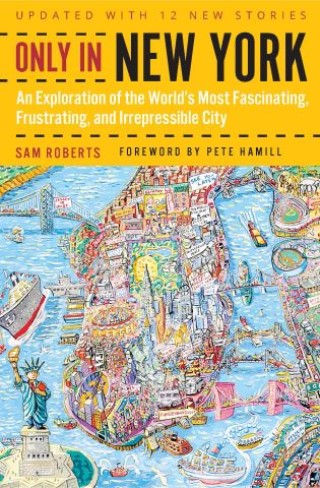 Only in New York

An Exploration of the World's Most Fascinating, Frustrating, and Irrepressible City

A “street-smart, informative and occasionally hilarious” look at the places, personalities, and history that make New York one of a kind (Publishers Weekly).

Reporter Sam Roberts has covered the city in all its quirkiness, both in print and in his popular New York Times podcasts. In Only in New York, now updated with new stories, he writes about what makes this city tick and why things are the way they are in the greatest of all metropolises on earth. These essays cover topics such as:

-How New Yorkers react during disasters
-Maritime history (the Hudson River)
-Crowds, space, and population growth
-The pooper scooper revolution
-The Jewish Daily Forward
-What happens when a neighborhood loses its tony ZIP code, and more

“Roberts has covered the city for 40 years. So as we locals say, he knows from, and it shows in this fabulous collection of essays. With wit and grace, he tells stories of its citizens—some illustrious, others not; some living, others long dead. But the story he’s really telling is that of New York, and he nails it.” —Daily News (New York)