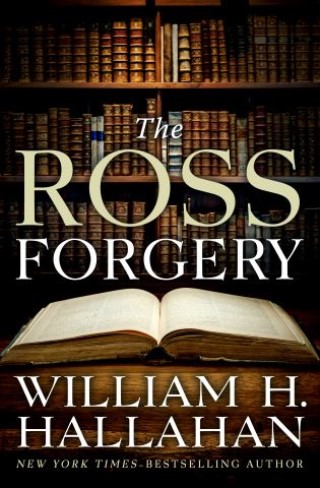 “Ingenious” crime fiction with “a twisting shocker of a conclusion . . . You wouldn’t believe so much suspense and tension could be generated” (The Washington Post).

A Texas millionaire has everything under the sun, including an impressive collection of Thomas J. Wise forgeries. He is the envy of every twentieth-century book collector. He is also the nemesis of New York tycoon Emmett O’Kane, who has everything under the sun but a Wise folio. O’Kane commissions Edgar Ross, a brilliant down-at-the-heels type designer, to make him a Wise folio, to create a forgery of a forgery. But he wants Ross to go one step further: He wants a Wise forgery that doesn’t exist! Ross knows this is not only an illegal undertaking; it is an impossible one. But he owes the Family a large gambling debt, and he knows that the Family collects its debts in brutal, often fatal ways . . .

William H. Hallahan:
William H. Hallahan (1925–2019) was an Edgar Award–winning American author whose works spanned genres but who was best known for his bestselling mystery and occult novels. His first novel, The Dead of Winter, was nominated for the Edgar Award for Best First Mystery Novel, and his suspense novel, Catch Me: Kill Me, won the Edgar Award for Best Mystery Novel. Hallahan’s occult novel, The Search for Joseph Tully, was a New York Times bestseller and hailed as one of the best books of its genre. For the book opening, mock gravestones that read “Here Lies Joseph Tully” were lined up and down Park Avenue in New York. His other works of fiction include The Ross Forgery, Keeper of the Children, The Trade, The Monk, Foxcatcher, and Tripletrap. His works were translated into many languages and released throughout the world.

Hallahan was born in the shadow of Ebbets Field, Brooklyn; spent three years in the Navy; graduated with honors and a master’s degree from Temple University; and worked variously as a college English professor, a copywriter, and an ad agency proprietor in his own agency, Hallahan Incorporated.