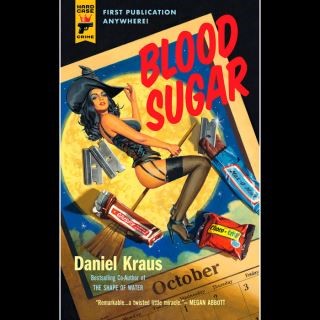 From the dark imagination of New York Times bestselling novelist Daniel Kraus - co-author with Guillermo del Toro of THE SHAPE OF WATER (which as a film won the Academy Award for Best Picture) - comes a Halloween crime story that's like nothing you've ever heard before.

WHEN TRICK OR TREAT

At the end of Yellow Street, in a ruined junkyard of a house, an angry outcast hatches a scheme to take revenge for all the wrongs he has suffered. With the help of three alienated neighborhood kids, he plans to hide razor blades, poison, drugs, and broken glass in Halloween candy and use the deadly treats to maim or kill dozens of innocent children. But as the clock ticks closer to sundown, will one of his helpers - an innocent himself, in his own streetwise way - carry out or defeat the plan?

Told principally from the child's point of view, in a voice as startling and unforgettable as A Clockwork Orange, Kraus' novel is at once frightening and emotional, thought-provoking and laugh-out-loud funny. It'll make you rethink your concepts of family and loyalty and justice - and will leave you anxiously double-checking the wrappers on your Halloween candy for the rest of your days.