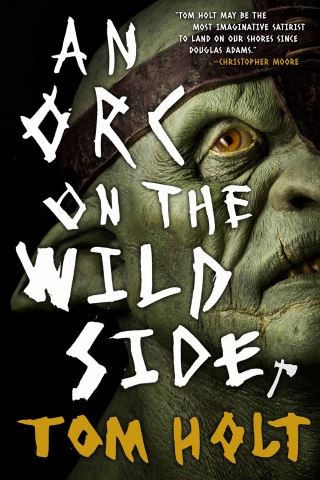 An Orc on the Wild Side

An Orc on the Wild Side is the latest comic masterpiece from one of the funniest writers in fantasy.
Winter is coming, so why not get away from it all?
Being the Dark Lord and Prince of Evil is not as much fun as it sounds, particularly if you are a basically decent person. King Mordak is just such a person. Technically he's more goblin than person, but the point is that he is really keen to be a lot less despicable than his predecessors.
Not that the other goblins appreciate Mordak's attempts to redefine the role. Why should they when his new healthcare program seems designed to actually extend life expectancy, and his efforts to end a perfectly reasonable war with the dwarves appear to have become an obsession?
With confidence in his leadership crumbling, what Mordak desperately needs is a distraction. Perhaps some of these humans moving to the Realm in search of great homes at an affordable price will be able to help?
For more from Tom Holt, check out:
The Management Style of the Supreme Beings
The Good, The Bad, and the Smug
The Outsorcerer's Apprentice
When It's a Jar
Doughnut
Life, Liberty, and the Pursuit of Sausages
Blonde Bombshell