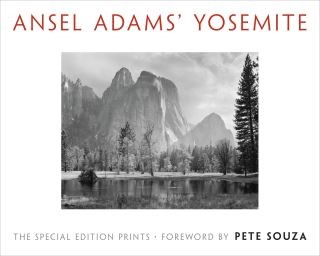 America's greatest photographer on his greatest subject--featuring the Yosemite Special Edition Prints, a collectible collection of photographs selected by Ansel Adams during his lifetime, yet never before published in book form.

The photographs of Ansel Adams are among America's finest artistic treasures, and form the basis of his tremendous legacy of environmental activism.
In the late 1950s, Adams selected eight photographs of Yosemite National Park to offer exclusively to park visitors as affordable souvenirs. He hoped that these images might inspire tourists to become activists by transmitting to them the same awe and respect for nature that Yosemite had instilled in him. Over the following decades, Adams added to this collection to create a stunning view of Yosemite in all its majesty.
These photographs, the Yosemite Special Edition Prints, form the core of this essential volume. Adams' luminous images of Yosemite's unique rock formations, waterfalls, meadows, trees, and nature details are among the most distinctive of his career. Today, with America's public lands increasingly under threat, his creative vision remains as relevant and convincing as ever.
Introduced by bestselling photographer Pete Souza, with an essay by Adams' darkroom assistant Alan Ross, Ansel Adams' Yosemite is a powerful continuation of Adams' artistic and environmental legacies, and a compelling statement during a precarious time for the American earth.