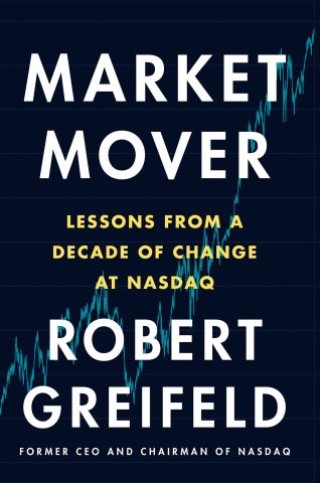 Lessons from a Decade of Change at Nasdaq

Former CEO and Chairman of Nasdaq, Robert Greifeld shares stories, insights, and lessons learned from one of the world's largest stock exchanges, detailing his transformation of Nasdaq from a fledgling U.S. equities market to a global financial technology company.

During 2003, the U.S. economy was described by one economist as "nervous, anxious, and waiting." In December the Dow had topped 10,000 for the first time in a year and a half, and at year's end the markets were up for the first time since 1999. But in the same year, American troops had moved into Iraq, and corporate boards were cutting CEOs at the slightest signs of trouble.
Amidst this turmoil Robert Greifeld, a former tech entrepreneur from outside the Wall Street bubble, became CEO of Nasdaq, a position he would hold for the next thirteen years. He saw the company through one of the most mercurial economic periods in history: the Bernie Madoff mega-scandal; Facebook's tumultuous and disastrous IPO; Hurricane Sandy's disruption of the world's financial hub; the implosion of America's housing market and the global economic crash that followed, from which we have yet to fully recover. In Market Mover, Bob will write a first-hand account of the most critical moments of his career, with each chapter focusing on a headline-making event and ending with a prescriptive takeaway to impart to his readers.
Now Bob, who stepped aside as Nasdaq's CEO at the end of 2016, is eager to look back at more than a decade of transformational change that occurred on his watch in order to share his insights and lessons with business readers.