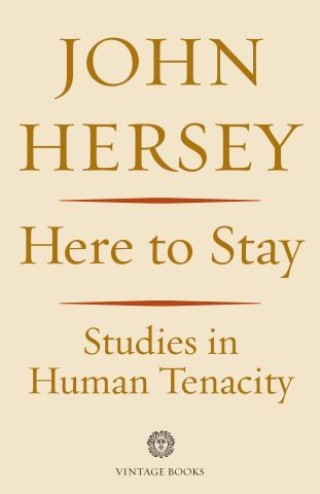 In Here to StayJohn Hersey tells of episodes in the past twenty years in which Man has courageously risen above desperate situations and shown his determination to survive despite the threats of the nuclear age.
Mr. Hersey first tells the story of an old lady marooned on a rooftop amidst floods caused by a hurricane. He ends with his famous Hiroshima, the story of the survivors of the first atomic bombing, written from personal investigation, with horrifying detail and compassionate indignation.
Between these two pieces we read of John Kennedy’s heroism in rescuing the crew of his PT boat, sunk by the Japanese, seventeen years before he became President; a Jew’s suffering in Auschwitz; a crippled G.I.’s difficulties in adjusting himself to civilian life; the rehabilitation of a soldier paralyzed with fright; the adventures of two Poles who survived persecution; and a most moving account of an escape from Hungary in 1956.
All John Hersey’s books have had a serious purpose. A Bell for Adanodrew attention to Italy’s plight; The Wall studied the Polish Jews’ struggle against tyranny; The War Lover exposed the war mentality;The Child Buyershowed up the exploitation of talent. Here to Stayis a stirring reminder of our inherent ability to meet the challenge of extinction which now faces the world.

John Hersey: John Hersey was born in Tientsin, China, in 1914 and lived there until 1925, when his family returned to the United States. He studied at Yale and Cambridge, served for a time as Sinclair Lewis’s secretary, and then worked several years as a journalist. Beginning in 1947, he devoted his time mainly to writing fiction. He won the Pulitzer Prize, taught for two decades at Yale, and was president of the Authors League of America and chancellor of the American Academy of Arts and Letters. John Hersey died in 1993.