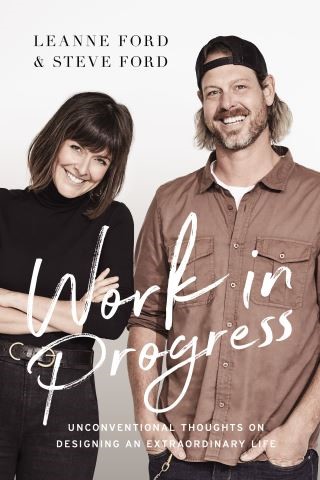 How did a couple of quirky siblings from suburban Pittsburgh end up as the king and queen of eclectic-design chic with their own HGTV show? They never let fear get in the way of a great idea. Leanne and Steve Ford share their secrets for how to turn dreams into reality.

Leanne and Steve were middle-class kids growing up in Pittsburgh in the 80s and 90s. There was nothing particularly glamorous or unusual about their lives as kids. Leanne was a shy, stubborn child who lived a rich life in her own imagination. Steve was outdoorsy and offbeat and was bullied mercilessly at school for being different. Their parents, grounded in faith and always encouraging of both creativity and hard work, gave them the confidence and the encouragement they needed to pursue the often difficult creative life. Leanne’s slogan as a child was, “My name is Leanne. If I want to, I can.”

Leanne studied clothing design and pulled gigs at fashion houses in New York and as a stylist to country music stars in Nashville before she found her true passion: interior design. Steve threw himself into kayaking and snowboarding and opening his own men’s clothing store in Pittsburgh. And then their individual passions converged when Leanne asked Steve to help renovate her bathroom. There was magic in their collaboration, and they began renovating for clients in Pittsburgh—creating unique, authentic spaces that manage to feel both chic and completely obtainable—before catching the eye of producers at HGTV.

Leanne and Steve share the details of their journey, including the beliefs that have inspired them and the experiences that have challenged them along the way.

LEANNE FORD is an American interior designer from Pittsburgh, Pennsylvania. Her easy vibe and personal style match the stylish yet approachable spaces she creates and curates. Her work has been featured in Architectural Digest, Country Living, Domino, GQ, Lonny, Elle Decor, Martha Stewart, Better Homes and Gardens, Redbook, MyDomaine, Refinery 29, the New York Times. She is currently the star, along with her brother and contractor Steve Ford, of Restored by the Fords on HGTV, which follows the siblings as they turn some of Pittsburgh’s most dated buildings into magazine-worthy homes.