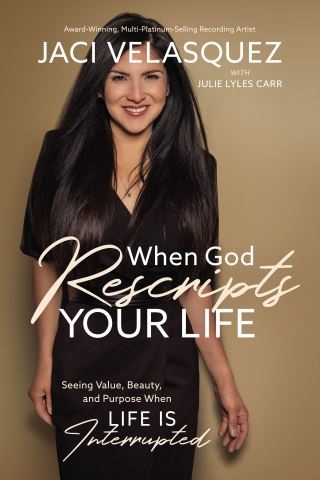 When God Rescripts Your Life

Seeing Value, Beauty, and Purpose When Life Is Interrupted

At a young age, Jaci Velasquez’s singing career rocketed to stardom, and her marriage thrived—then both suddenly crashed. Losing her reputation, her record label, and even some of her most-treasured relationships, Jaci began a long, healing journey from thinking of herself not as a Christian music darling or a broken young woman but as a beloved child of God. Today, her renewed faith carries her through a resurrected career, the adventures of a second marriage, and the ups-and-downs of being a mother of a child who has autism.

When God Rescripts Your Life is Jaci’s exploration of the lessons she’s learned living a story full of mistakes and grace, rejection and contentment, worldly success and spiritual rest. Drawing on lessons from biblical characters such as Aaron, Joseph, and Paul, as well as from illustrations from her own life, Jaci reminds us how God loves to rewrite pain and weakness into a glorious tale of redemption. The most difficult parts of life don’t need to be removed; they need to be rescripted.

Jaci Velasquez has attained three RIAA® certified Platinum® albums, three RIAA certified Gold® albums, sixteen No. 1 singles, six more singles in the top 10, seven Dove Awards, three Latin Grammy® Award nominations, and three Grammy Award nominations. She has also graced more than fifty magazine covers, including Teen People, Latin Girl, Teen Beat, Parade, and People and has as appeared in ads for Pepsi, Doritos, and Target. For nearly six years, she has co-hosted Salem Broadcasting Network’s “The Family Friendly Morning Show with Doug and Jaci Velasquez” with more than 1.5 million daily listeners. In addition to writing, recording, touring, and serving as an advocate for autism awareness, Velasquez has been featured in five faith-based films since 2009, hosted the SESAC Christian Music Awards and the GMA IMMERSE conference, and has been internationally active in the music industry since her emergence as an award-winning artist at the age of sixteen.

Julie Lyles Carr holds a degree in psychology which she uses every day in her parenting of eight children and also a degree in English Literature, which came in handy for writing a book on parenting. She is a popular speaker and blogger. She serves as the Pastor of Women’s Ministry at her home church of LifeAustin in Austin, Texas. Julie is also the Founder and Executive Director of Legacy of Hope Austin, a non-profit group dedicated to serving families of children with special needs. Julie and her husband Michael have been married for almost twenty-six years.