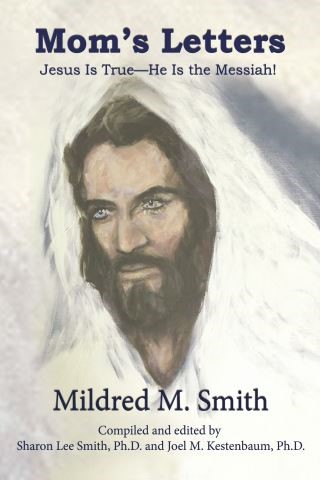 Jesus Is True---He Is the Messiah!

Mildred Smith wrote this devotional guide. In 1976, she received the Baptism of the Holy Spirit. A few months later, the Holy Spirit began dictating letters for her to write. As thoughts would form in her mind, with paper and pen, she would write those words down, word by word as they came to her. She did not form these thoughts by herself; they were topics about which she had little or no information. They were scripturally based, although she did not know it at the time. Some of the ideas seemed strange to her. They certainly were not her ideas.

In 1776, the United States became a nation. Two hundred years later, in 1976 after she received the Baptism of the Holy Spirit, Mildred started writing. She wrote these specific letters in 1999. Today, reading them is like hearing the daily news as viewed by God. Prophetic? Yes. A miracle? Indeed!

The love of Jesus is evident in these letters. As people read them, they are aware of the depth of love that Jesus has for all mankind! Jesus does not condemn anyone! He calls and draws them into a daily walk with Him.

One of the most significant things about these letters was the loving way in which they were written. If the letter dealt with sin, it was presented in a manner that gave anyone reading the letter an insight regarding why sin offends God. The letter leads the reader to seek change away from that sin, drawing that person closer to Jesus.

Whether a person reads only one letter a day or reads the book in its entirety all at once, his or her life will be changed. It is a labor of love sent to the people of Earth. Mildred wrote daily, except Sundays or during the times when earthly matters took precedence in Mildred’s life. She was never in a trance. She could answer anyone who spoke to her and then she could continue with the letter. She could write at any time that she chose. The Holy Spirit was there whenever she asked Him to talk to her.

These letters are just a small sample of the way that the Holy Spirit communicated with her. The letters are on many diverse subjects; all are related to God and the way that man relates to God. They bring wisdom and understanding about God to a world that has shut God out of daily life.

Early when Mildred began writing, Sharon Smith, Ph.D., her oldest child and only daughter, was assigned to be the Script Bearer. Sharon’s assignment has now started. She and her husband, Joel M. Kestenbaum, Ph.D. are the compilers and editors. They, as did many others including Mildred’s husband, Burl C. Smith, their three sons, Steve, Jeff and Phil, their spouses and their children, watched as Mildred would sit and write without any preparation or hesitation. The words were always amazing, often prophetic and always from God.

The letters are like a spiritual bath of goodness. They clean our souls as we read the thoughts that have been sent to purify us. God would speak face to face with people. He is love, see Him as such!

Mildred M. Smith was a maidservant and scribe for the Holy Spirit from 1976 to 2011. After she received the Baptism of the Holy Spirit, He would dictate to her wondrous words of God’s love and truth. She wrote His Words. Others saw this miracle in action; her family saw it most frequently. She would sit down with paper and pen to write, filling a notebook page on the front and back for each letter. If the phone rang or someone came to the door, she would stop writing and respond. When finished with the short or long interruption, she would sit down again, pick up her pen and continue with the next word. She did not have to read where she stopped because they were not her words. She was a high school graduate, a wife, mother and grandmother. She helped her husband, Burl, in his office after their four children had graduated from high school. Since Mildred always handwrote the letters, Burl started typing the letters after his retirement. They always functioned as a team. Once their children introduced him to word processing, the electronic record began. As is God’s amazing timing, Mildred started writing in 1976, two hundred years after the United States became a nation. She wrote these specific letters in 1999. Today, reading these letters is like reading the daily news as viewed by God. Prophetic? Yes. A miracle? Indeed! The words in these letters are a continual blessing to each reader. Jesus sacrificed His life to draw all closer to God; make the choice to hear His Word. Be blessed as you read.