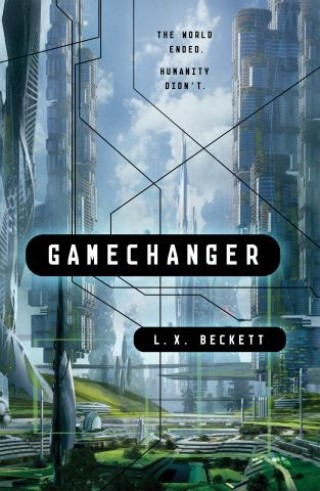 First there was the Setback.

Then came the Clawback.

Rubi Whiting is a member of the Bounceback Generation. The first to be raised free of the troubles of the late twenty-first century. Now she works as a public defender to help troubled individuals with anti-social behavior. That’s how she met Luciano Pox.

Luce is a firebrand and has made a name for himself as a naysayer. But there’s more to him than being a lightning rod for controversy. Rubi has to find out why the governments of the world want to bring Luce into custody, and why Luce is hell bent on stopping the recovery of the planet.

L. X. Beckett: L. X. BECKETT frittered their misbegotten youth working as an actor and theater technician in Southern Alberta, before deciding to make a shift into writing science fiction. Their first novella, “Freezing Rain, a Chance of Falling,” will appear in the July/August issue of the Magazine of Fantasy and Science Fiction in 2018, and takes place in the same universe as Gamechanger. Lex identifies as feminist, lesbian, genderqueer, married, and Slytherin, and can be found on Twitter or at a writing advice blog, the Lexicon.