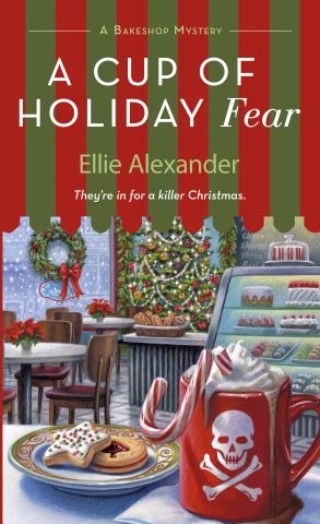 A Cup of Holiday Fear

It’s Christmastime and everyone is heading to Torte, the most cheerful bakery in town. There’s no place like home for the homicide…

Ashland, Oregon, looks as pretty as a postcard this holiday season. The halls are decked, stockings hung, and eyes are all aglow—mostly thanks to the buttered rum. Jules Capshaw and her staff at Torte are busier than ever. . . still, even the town’s most in-demand bakers need to take a break. So Jules invites everyone to celebrate at the local Winchester Inn’s Dickens Feast, a six-course extravaganza with Yorkshire Pudding, Christmas goose, and all the trimmings. But as the weather outside becomes frightful, things inside turn less delightful when one of the guests ends up as dead as Scrooge’s doornail. Now it’s up to Jules and her helpers to make a list of suspects—and check it twice—to try to find out who’s naughty, who’s nice, and who’s guilty of murder…

Ellie Alexander: ELLIE ALEXANDER is a Pacific Northwest native who spends ample time testing pastry recipes in her home kitchen or at one of the many famed coffeehouses nearby. When she's not coated in flour, you'll find her outside exploring hiking trails and trying to burn off calories consumed in the name of "research." She is the author of the Bakeshop Mysteries, including Meet Your Baker and A Batter of Life and Death, as well as the Sloan Krause mysteries. Find her on Facebook to learn more!