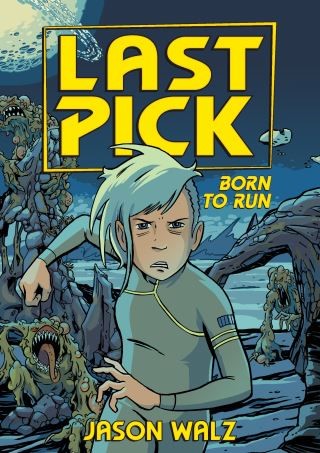 In Last Pick: Born to Run, the second volume of his graphic novel series, Jason Walz pairs vivid world-building and fast-paced adventure in a beautiful story of bravery, sacrifice, and sibling devotion.

Four years ago, aliens kidnapped most of mankind, leaving behind those they deemed unworthy—the “last picked.”

The future for Sam is bleak and unthinkable. A galaxy away from her twin brother, she is a pawn in the aliens’ bloody civil war. But with her new friend Mia, Sam has found a way to resist her captors and hold onto her humanity.

Back on Earth, Sam’s twin, Wyatt, is leading a resistance of his own. With a ragtag army of the old, the young, and the disabled, he has a plan to bring the fight to his alien captors. But to defeat the aliens, Wyatt may need to befriend one.

Jason Walz: Jason Walz is a cartoonist and illustrator living in Minneapolis, Minnesota. He is the creator of the Eisner nominated graphic novel Homesick, the online comic anthology Crap Shoot, and several short story comics. His many years teaching in special education continue to shape his life and the stories he wants to tell.