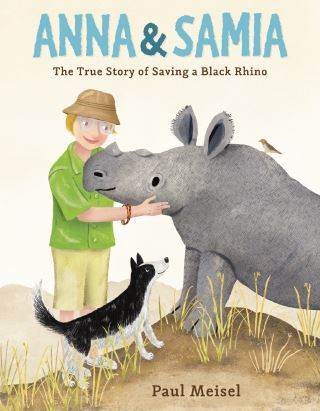 The True Story of Saving a Black Rhino

From Geisel Honor–winning author/illustrator Paul Meisel comes Anna & Samia, the true story of a wildlife conservationist and the baby rhinoceros she adopts.

When infant rhino Samia finds herself all alone in the vast Kenyan rhino sanctuary, conservationist Anna Merz knows just what to do. Little by little, she helps Samia feel warm and at home, snuggling with the black rhino in her bed, deciphering every snort and eek, and giving Samia baths to keep her clean.

Each step Anna takes is meant to help Samia get closer to becoming independent. But the bond between Samia and Anna is so strong that Samia may not want to leave, even when she's ready. Can Samia learn to explore the sanctuary on her own?

Here is a heartfelt true story about love, growing up, and letting go.

Paul Meisel: Paul Meisel is the author and illustrator of I See a Cat (2017) and See Me Run (2012), both Theodor Seuss Geisel Honor Books. He has illustrated more than 70 books from early readers to picture books, including How to Talk Cat by Jean Craighead George. Paul has also illustrated for the New York Times, the Boston Globe, the Harvard Business Review, and a number of other publications. He lives in Connecticut.