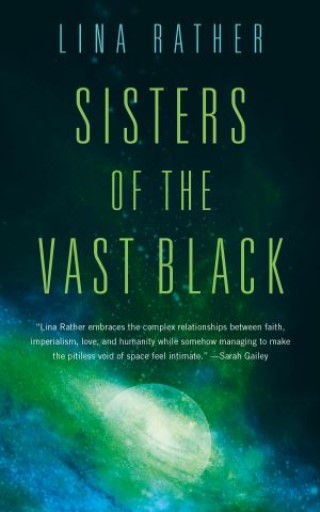 Sisters of the Vast Black

The sisters of the Order of Saint Rita captain their living ship into the reaches of space in Lina Rather's debut novella, Sisters of the Vast Black.

Years ago, Old Earth sent forth sisters and brothers into the vast dark of the prodigal colonies armed only with crucifixes and iron faith. Now, the sisters of the Order of Saint Rita are on an interstellar mission of mercy aboard Our Lady of Impossible Constellations, a living, breathing ship which seems determined to develop a will of its own.

When the order receives a distress call from a newly-formed colony, the sisters discover that the bodies and souls in their care—and that of the galactic diaspora—are in danger. And not from void beyond, but from the nascent Central Governance and the Church itself.

Lina Rather: Lina Rather is a speculative fiction author from Michigan, now living in Washington, D.C. Her stories have appeared in a variety of publications, including Shimmer, Flash Fiction Online, and Lightspeed. When she isn’t writing, she likes to cook, go hiking, and collect terrible 90s comic books.