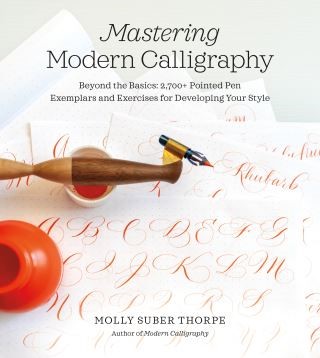 Beyond the Basics: 2,700+ Pointed Pen Exemplars and Exercises for Developing Your Style

MOLLY SUBER THORPE has been heralded as a driving force behind today’s modern calligraphy movement. She has taught pointed pen calligraphy for many years, giving her special insight into the learning tools beginner, intermediate, and professional modern calligraphers really want, and which ones are particularly hard to find. An expert in the field, Molly has worked with major brands such as Google Arts & Culture, Martha Stewart, Michael Kors, and Fendi.

Her work and words have appeared in dozens of publications, including The Wall Street Journal, LA Times, The Guardian, UPPERCASE, and Buzzfeed. Molly is the author of two bestselling books for calligraphers: Modern Calligraphy: Everything You Need to Know to Get Started in Script Calligraphy (2013) and The Calligrapher’s Business Handbook: Pricing and Policies for Lettering Artists (2017).