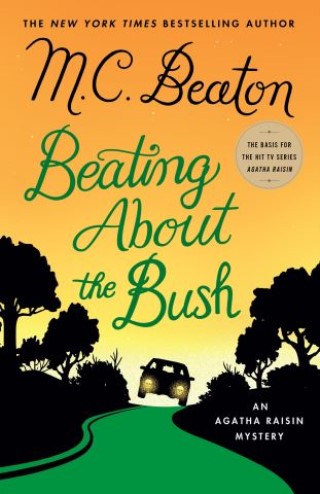 Beating About the Bush

When private detective Agatha Raisin comes across a severed leg in a roadside hedge, it looks like she is about to become involved in a particularly gruesome murder. Looks, however, can be deceiving, as Agatha discovers when she is employed to investigate a case of industrial espionage at a factory where nothing is quite what it seems.

The factory mystery soon turns to murder and a bad-tempered donkey turns Agatha into a national celebrity, before bringing her ridicule and shame. To add to her woes, Agatha finds herself grappling with growing feelings for her friend and occasional lover, Sir Charles Fraith. Then, as a possible solution to the factory murder unfolds, her own life is thrown into deadly peril. Will Agatha get her man at last? Or will the killer get her first?

M. C. Beaton (1936-2019), the “Queen of Crime” (The Globe and Mail), was the author of the New York Times and USA Today bestselling Agatha Raisin novels -- the basis for the hit show on Acorn TV and public television -- as well as the Hamish Macbeth series and the Edwardian Murder Mysteries featuring Lady Rose Summer. Born in Scotland, she started her career writing historical romances under several pseudonyms and her maiden name, Marion Chesney.