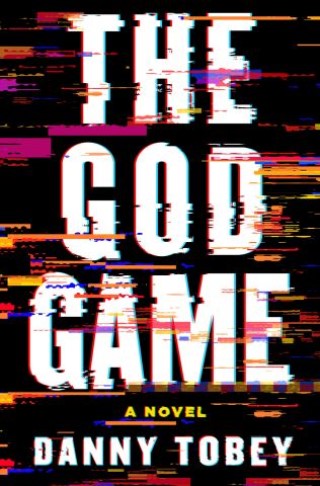 "Smart, propulsive and gripping, THE GOD GAME is an ambitious thriller and a terrifying examination of what could--and probably already is--happening in the world of artificial intelligence."—Harlan Coben, #1 New York Times bestselling author of Run Away

A technological thriller with an all-too-believable premise, award-winning author Danny Tobey's The God Game follows five teenagers obsessed with an online video game that connects them to their worst impulses and most dangerous desires.

They call themselves the Vindicators. Targeted by bullies and pressured by parents, these geeks and gamers rule the computer lab at Turner High School. Wealthy bad boy Peter makes and breaks rules. Vanhi is a punk bassist at odds with her heritage. Kenny's creativity is stifled by a religious home life. Insecure and temperamental, Alex is an outcast among the outcasts. And Charlie, the leader they all depend on, is reeling from the death of his mother, consumed with reckless fury.

They each receive an invitation to play The God Game. Created by dark-web coders and maintained by underground hackers, the video game is controlled by a mysterious artificial intelligence that believes it is God. Obey the almighty A.I. and be rewarded. Defiance is punished. Through their phone screens and high-tech glasses, Charlie and his friends see and interact with a fantasy world superimposed over reality. The quests they undertake on behalf of "God" seem harmless at first, but soon the tasks have them questioning and sacrificing their own morality.

High school tormentors get their comeuppance. Parents and teachers are exposed as hypocrites. And the Vindicators' behavior becomes more selfish and self-destructive as they compete against one another for prizes each believes will rescue them from their adolescent existence. But everything they do is being recorded. Hooded and masked thugs are stalking and attacking them. "God" threatens to expose their secrets if they attempt to quit the game. And losing the game means losing their lives.

You don't play the Game. The Game plays you....

Danny Tobey is a fifth-generation Texan. He went to Harvard College, Yale Law School, and UT Southwestern medical school. Harvard gave Danny the Edward Eager prize "for the best creative writing." He wrote and edited the Harvard Lampoon and was anthologized in The Best of the Harvard Lampoon: 140 Years of American Humor.

Danny's first novel, the sci-fi fantasy thriller The Faculty Club, came out from Simon & Schuster. Danny is a noted expert on Artificial Intelligence. In 2019, the Library of Congress gave Danny the Burton Award for his work on AI and the law.