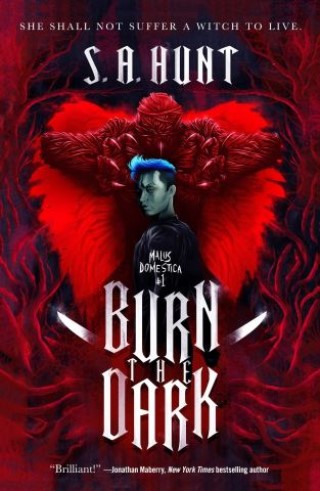 Chilling Adventures of Sabrina meets Stranger Things in award-winning author S. A. Hunt’s Burn the Dark, first in the Malus Domestica horror action-adventure series about a punk YouTuber on a mission to bring down witches, one vid at a time.

Robin is a YouTube celebrity gone-viral with her intensely-realistic witch hunter series. But even her millions of followers don't know the truth: her series isn’t fiction.

Her ultimate goal is to seek revenge against the coven of witches who wronged her mother long ago. Returning home to the rural town of Blackfield, Robin meets friends new and old on her quest for justice. But then, a mysterious threat known as the Red Lord interferes with her plans….

S. A. Hunt: S. A. HUNT is a U.S. veteran, speculative fiction author, and Winner of Reddit.com/r/Fantasy's "Independent Novel of the Year" Award. They live in Petoskey, Michigan. Burn the Dark is the first volume in the Malus Domestica series.