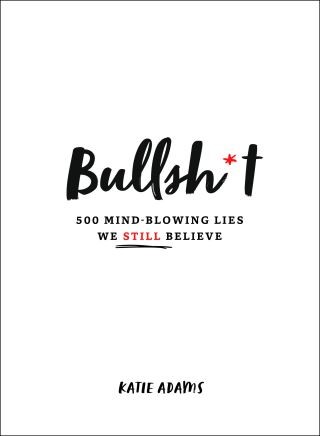 Compelling trivia for our age of disinformation

American culture is awash in lies. Despite the fact that we have the truth at our fingertips at all times, Americans still believe lies about everything from health to politics to science to business. Kate Adams's clever trivia book debunks the 500 most common untruths and shows readers why we are all so susceptible to misinformation, and also includes a chapter on facts that are true, but seem like bullsh*t.

Left and Right Brain
There’s no solid division between hemispheres; the left brain can learn “right-brain skills” and vice versa.

Three Wise Men
Nowhere in the Bible does it specify that there were three.

Flush Rotation
A flushed toilet doesn’t drain the other way in the opposite hemisphere. The Coriolis effect doesn’t apply to water in toilets.

Einstein was a terrible student and failed mathematics.
Albert Einstein actually aced his report cards. His reputation for being a notoriously terrible student? That came from his habit of talking back to his teachers when he felt they were acting too authoritarian.

A day on Venus is longer than a year.

A chicken lived without a head for 18 months.

Human children don't get kneecap bones until they're around three years old.

A mantis shrimp can punch with the force of a 22-caliber bullet.

Katie Adams: KATIE ADAMS is a writer and contributor to over 30 bestselling trivia, nonfiction, and humor books. She also provides the insatiable void of the internet with endless hours of entertaining content. In her free time, Katie enjoys practicing her epigrammatic wit on her tolerant and loving family in the Pacific Northwest.