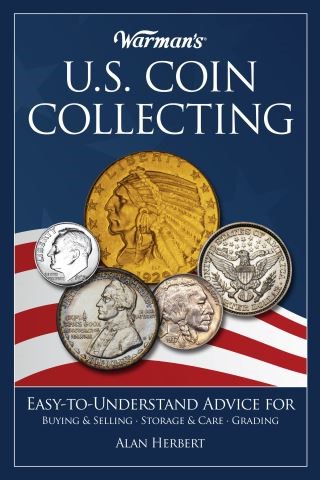 GET STARTED COLLECTING COINS Have fun and Avoid Costly Mistakes

Want to know just what's in that box of coins Grandpa Earl left you? Or do you just want to embark on a hobby that will bring you years of enjoyment, and maybe a profit?

Warman's U.S. Coin Collecting is the book that will tell you everything you need to know about collecting U.S. Coins from author Alan Herbert.


• What is my coin worth?
• Don't clean your coin!
• Tools of the trade
• Proof coins, proof and mint sets
• Commemorative coins
• Grading coins
• Coins as an investment
• Bullion coins

And more than 100 questions and answers about U.S. coins, including little-known facts.

Alan Herbert: Known as the AnswerMan, Alan Herbert has been answering numismatic questions for more than four decades. His extensive research of the minting process makes him one of the top experts in the field of coin collecting, known nationally and internationally. Thousands of collectors have gotten their start through reading his popular "Coin Clinic" columns in the Krause Publications periodicals.