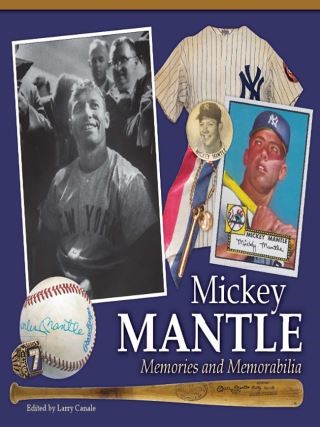 "When it comes to sports memorabilia, Mantle is king. No other sports athlete has been covered more or is more popular than Mantle, bar none. No one comes close."
T.S. O'Connell, editor of Sports Collector's Digest

Mickey Mantle is one of the most beloved sports figures of all times. Playing brilliantly for the New York Yankees, Mantle won three American League Most Valuable Player Awards and was named to 16 All Star games. He played on 12 pennant winners and seven World Series Championship clubs with the Yankees. He still holds records for most World Series home runs, RBIs, runs, walks, extra-base hits, and total bases, all topped off by his induction in the Baseball Hall of Fame in 1974.

Larry Canale: Larry Canale is a longtime editor and writer in the sports collectibles market. He is the former editor of Tuff Stuff, one of the nation's foremost magazines devoted to the sports memorabilia hobby. A lifelong fan of Mickey Mantle, Canale serves as the editor of Antiques Roadshow Insider. Featuring the classic sports photography of Ozzie Sweet, he wrote Micket Mantle: The Yankee Years.