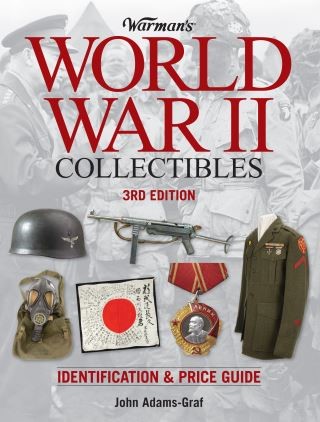 Since the end of World War II, veterans, collectors, and history buffs have bought, sold, and traded the "spoils of war." Souvenir collecting began as soon as troops set foot on foreign soil. Soldiers looked for wartime trinkets and keepsakes to remind them of their time in the service, validate their presence during the making of history, and generate income when they returned home. Today these items help us understand and define a time when almost the entire world was at war.

• 1,800 all-new color images and thousands of values
• History and collector tips
• Pros and cons of each collecting area
• Availability and price ratings, as well as reproduction alerts
• First-person accounts of the war

John Adams-Graf: John Adams-Graf, who has a Master of Arts degree in historical administration and worked in the museum profession for 20 years, is a lifelong military collector. He is the longtime editor of Military Trader and Military Vehicles Magazine and also catalogs collections for prominent militaria dealers and auction companies. He is the author of a number of books, including Warman's Civil War Collectibles (1st and 2nd editions), Warman's World War II Collectibles (1st edition), Standard Catalog of Civil War Firearms, Badgers for the Union, and U.S. MRAP Vehicles in Action.