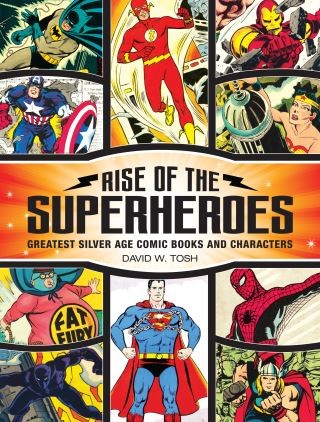 Rise of the Superheroes

They Could Be Heroes

Rise of the Superheroes--Greatest Silver Age Comic Books and Characters is a visual and entertaining adventure exploring one of the most popular and significant eras of comic book history. From 1956 to 1970, the era gave us Spider-Man, The Avengers, X-Men, The Incredible Hulk, Iron Man and a flurry of other unforgettable and formidable characters.

The Silver Age redefined and immortalized superheroes as the massive pop culture titans they are today.

• The new frontier of DC Comics, with a revamped Batman, Superman and Wonder Woman, and new characters including Hawkman
• Marvel's new comics featuring Thor and The Fantastic Four
• The pop art years that saw Batman's "new look" and the TV series
• Independent characters, including Fat Fury and T.H.U.N.D.E.R. Agents
• Spotlights new and re-imagined superheroes, like Wonder Woman, who have become central to modern pop culture
• Includes values of these comics, which are popular with collectors
Thanks to the Silver Age, superheroes are bigger and badder than ever.

David Tosh: David W. Tosh has been an avid fan of comic strips, animated cartoons, and comic books for most of his life. Since 2003, he has been a cataloger for Heritage Auctions in Dallas, Texas, specializing in comic books, original comic and animation art, and vintage rock posters. He and his wife, Sonia, live in Mesquite, Texas.